An effective way to extract as much energy as possible is to install a steam turbine after the gas turbine, in a “combined cycle”. This creates a system where it is possible to recover the thermal energy from the exhaust gases, in this case via steam, by adding a steam turbine in the ship’s funnel. The steam turbine generates electricity that can be made available on the ship for electric motors, chargers and other electrical devices. The result is greater efficiency and improved energy usage energy use.

Gas turbines generate hot exhaust gases that contain large amounts of energy. With a steam turbine located by the funnel, a shaft connected to a generator rotates to generate electricity. Combined cycle means that you capture much more of the energy created by the fuel used to power gas turbines and increase efficiency from 35 to about 50 per cent.

How the technology works

1. The gas turbine is driven by hydrogen and has a mechanical drivetrain to the ship’s gearbox

2. The hot gas from the gas turbine is piped through a steam boiler to create steam in the funnel

3. The steam in turn drives a steam turbine that is connected to a generator to produce electricity

4. The electricity powers an electric motor that is connected to the same gear system that is driven by the gas turbine

5. This combination of the electrical and the mechanical creates a drivetrain that is both flexible and efficient 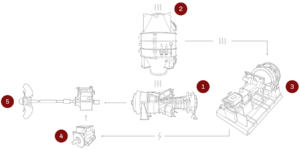